You are here: Home / Sports Mom Life / Jackie Robinson Day (Free Printables)
We may receive compensation from the companies whose products we review if you click through our affiliate links. As an Amazon Associate I earn from qualifying purchases.

Spring is full bloom! Typically this marks the start of the baseball season, but as we all know, this year things are a little different. Sadly major league baseball is deferred, but baseball itself is still very present in our hearts and minds. One of the greatest events at the start of the MLB season is the commemorating of Jackie Robinson day every year on the 15th of April. 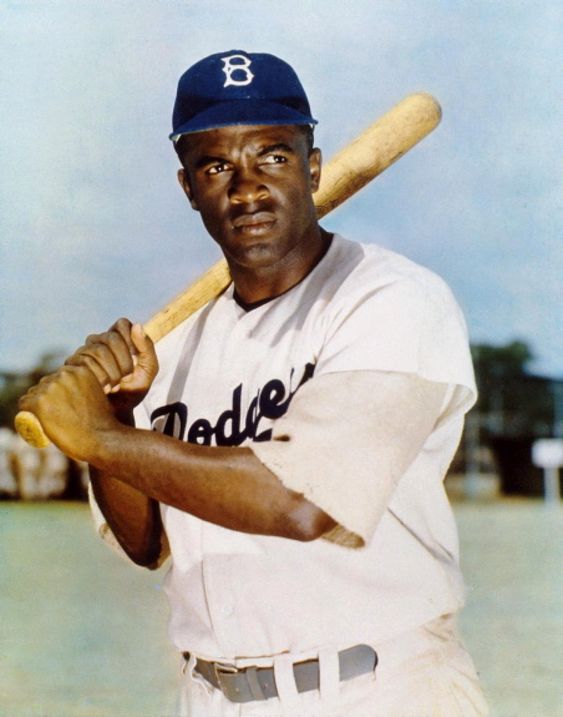 Jackie was an icon and legend, still to this day, so many admire him for his accomplishments on field, and off! He paved the way for many black athletes, who merely because of the color of their skin were not allowed in the major leagues and other pro sports.

It’s hard to believe that was the state of our nation just a few decades ago, but it was! He was the first, and he was ah-mazing! Jackie was an asset for the Dodgers and certainly earned every second on the field. For that we will forever honor number 42.

Celebrating this American hero is tradition for many who love the game of baseball. Typically Jackie is recognized at MLB ballparks around the nation. On that day, all players, coaches, and managers, and even the umpires, wear Robinson’s uniform number, 42.  April 15, 1947 marked the start of Robinson’s first season in the majors.

This year, as we await the delayed start of the MLB season, and as things have come to an indefinite halt all around the world, we can still honor this American sports hero.

Here are a few ways for families to recognize Jackie Robinson even as we stay at home:

1. Read a book with your kids about Jackie Robinson

Check out these great options:

I am Jackie Robinson (Ordinary People Change the World)

2. Have a sincere discussion with your kids about Jackie Robinson

The circumstances we’re living in right now can serve as the perfect segue into a valuable discourse into the life of Jackie Robinson.

A good discussion point: Jackie lived in trying times. Like him, kids need to endure and push through this uncertainty, as they continue to strive to stand out among the rest. This isn’t a break, this is an opportunity to work their hardest so that when they get their shot (when baseball starts up again), they can shine. This was the example left behind by men like Jackie. Let us always look up to leaders like Jackie Robinson, who never stopped believing!

3. Get out there and play some ball!

There is no better way to honor a baseball great than by playing the game! Just because baseball season is delayed doesn’t mean you can’t get out there and play ball. Keep the game alive, and skills fresh playing catch in yard, or doing some hitting and fielding drills. Not quite as good as playing in a live game, but it’s the closest to the real thing right now. Just like Jackie did, he kept his game strong as he waited for his opportunity.

4. Put some Jackie Robinson inspiration on the walls! 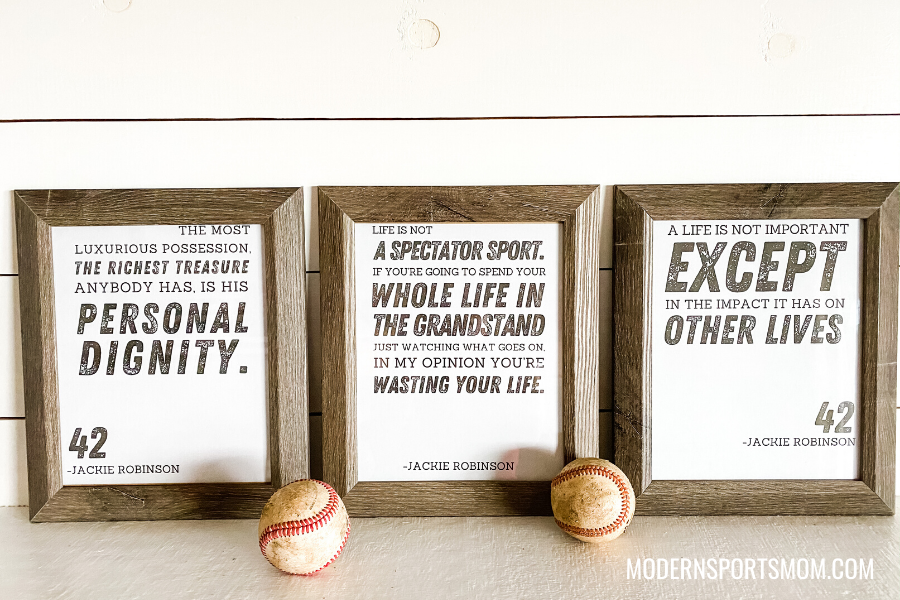 Jackie was humble, but never one to keep silent about what he believed in. Here are some of his most popular quotes:

The most luxurious possession, the richest treasure anybody has, is his personal dignity. -Jackie Robinson 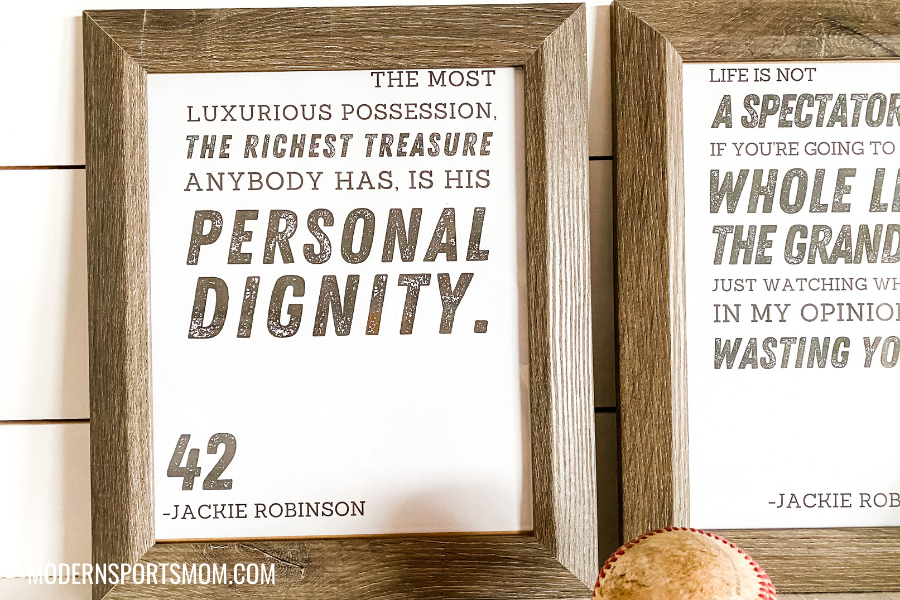 Life is not a spectator sport. If you’re going to spend your whole life in the grandstand just watching what goes on, in my opinion you’re wasting your life. -Jackie Robinson 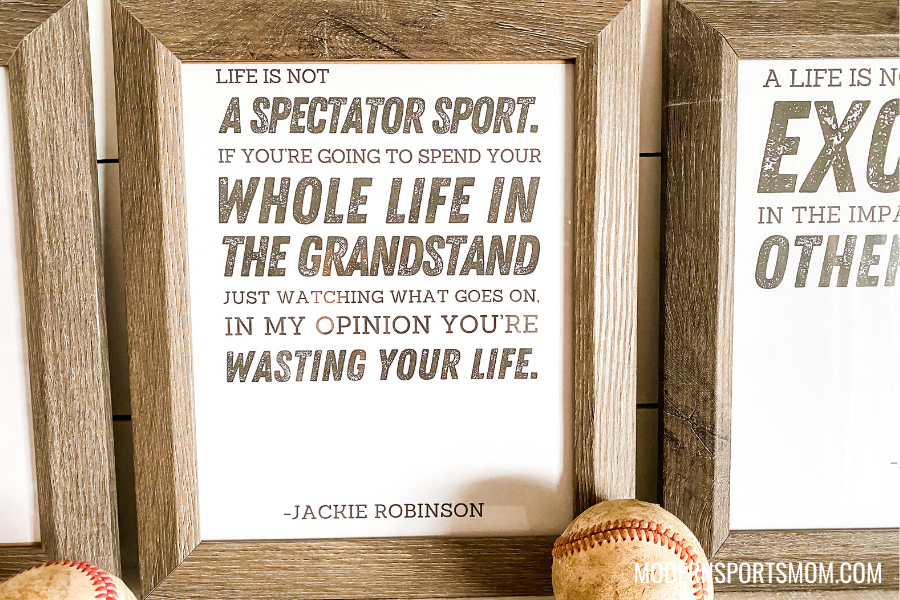 A life is not important except in the impact it has on other lives. -Jackie Robinson 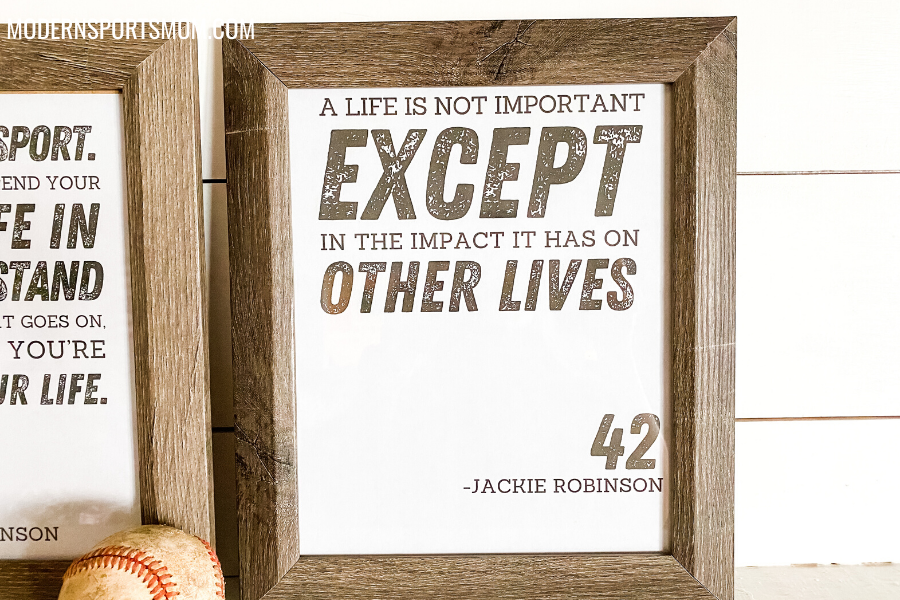 You’ll need three things and a little bit of time. We’ve got it all figured out for you! 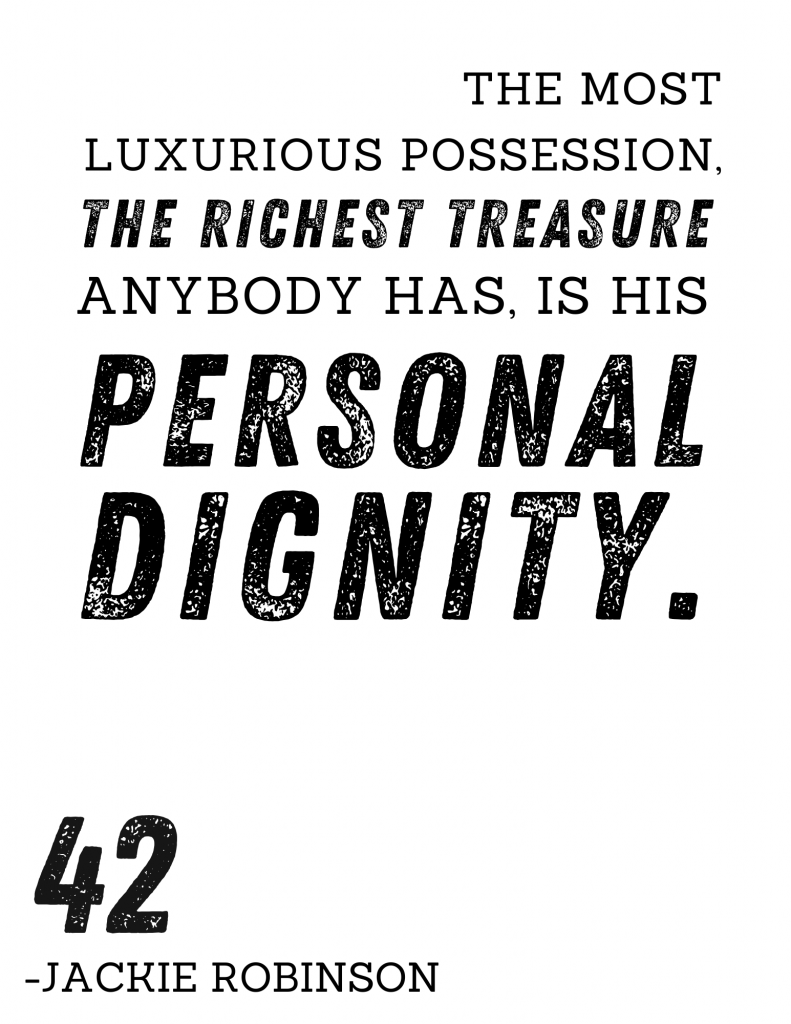 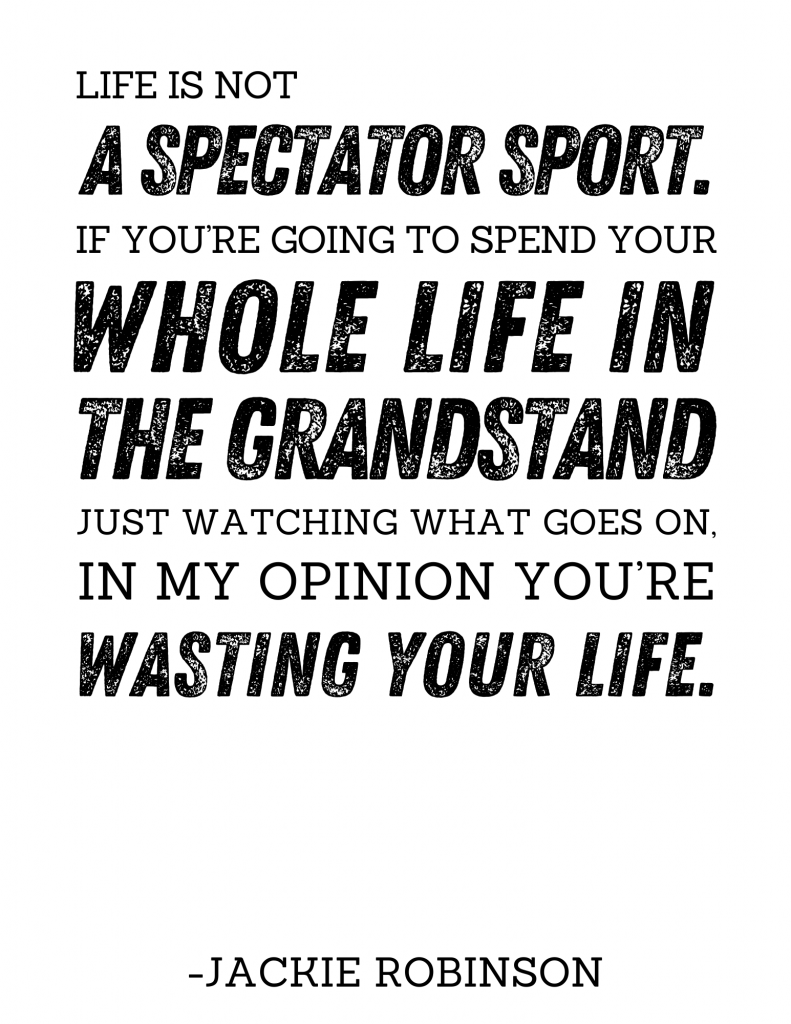 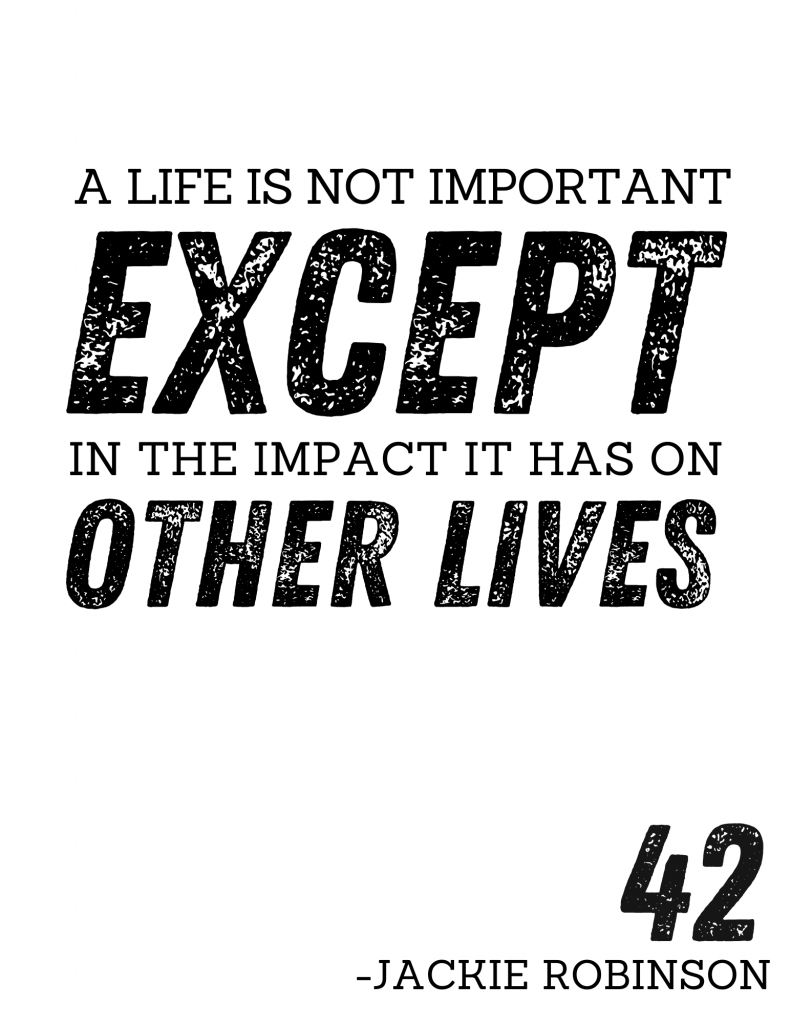 They are black and white so most at home printers will do, but if you want a specific type of paper, you can have them sent to your favorite printer.

Print them out and frame them like in the pic, or just tack them on to your kids’ walls or a bulletin board.

Anywhere they can see these motivating quotes and take in their message. 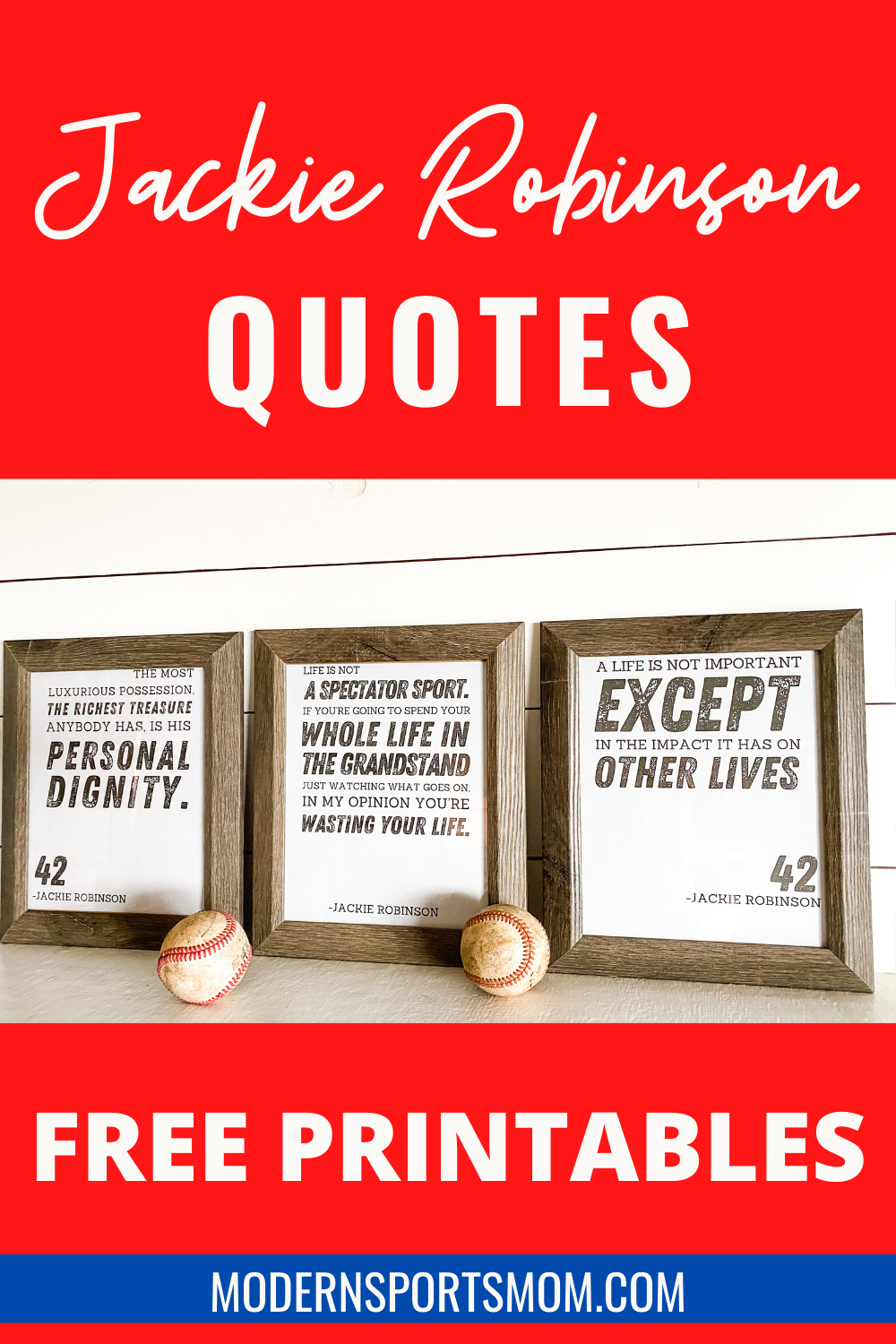 Thankfully kids these days will never truly know the struggles that Jackie had to endure just to get play the game professionally, many understand that it was indeed a far more difficult task than most.

It’s fitting that Major League Baseball honors the life of this man, year in and year out. While we are all staying at home this spring, let’s not forget to honor the memory of this great ball player!

Keep his strong legacy alive, and next year, let’s do it at the ballpark!

Modern Sports Mom is a participant in the Amazon Services LLC Associates Program, an affiliate advertising program designed to provide a means for sites to earn advertising fees by advertising and linking to Amazon (amazon.com, or endless.com, MYHABIT.com, SmallParts.com, or AmazonWireless.com).